Gambling Addiction, Our Vets, And People In General = Homelessness, Are They Linked?

Posted by kitcatlyon on Thursday, 10 July 2014 in Gambling Addiction


I happen to be on the social media site LinkedIn, and happen to see a question that was asked in one of my Addiction & Recovery Groups I belong to there. They asked if others think that gambling addiction is directly linked to homelessness of people who become addicted?
Now, I got to thinking myself, what an interesting questions to ask.

As we all know by seeing the homeless in our won communities throughout the US, and it is present in many different countries like the UK. In the UK, they are having an explosion of gamblers using an electronic device that is supposed to help your ODDS AT WINNING called an FOBT machine, but sadly it’s not very true, or works out that way. I have seen homeless women in my own communities of So. Oregon, and now here in Arizona. Does gambling have a direct link to some of our homeless in our communities?
Well, I found Studies, Facts , and articles that was written that supports it sure does!

Here is a little of what it found from the study:
.
New study reveals scale of problem gambling among homeless population

Credit: Gavin Mills/The Connection at St Martin’s ~April 3, 2014
.
Homeless people are ten times more likely to be problem gamblers than the UK population as a whole, researchers at Cambridge have found.

The study – one of the largest surveys of gambling and homelessness ever undertaken in the UK – provides new insight into a rarely studied problem and suggests homeless services should offer clients more support to identify and tackle problem gambling.

Although homelessness and problem gambling are two public health concerns, they are rarely considered together. This new study – published in the Journal of Gambling Studies – interviewed 450 people at homeless hostels and shelters in the London Borough of Westminster.

According to lead author Steve Sharman from the Department of Psychology: “Many issues face the homeless population, including drug and alcohol use. In terms of addiction research, most focus has been on drugs, alcohol and smoking, but the gambling field is relatively small in comparison. And while it is possible to spot physiological indicators of drug and alcohol addiction, problem gambling is much harder to identify.”

Finding out more about gambling addiction is important at a time when gambling opportunities are wider than ever. “Gambling has exploded in popularity over the past 20 years, partly due to changes in legislation but also because of new technology,” said Sharman.

“Where earlier generations were limited to betting shops and football pools, today there’s everything from online slots to in-play betting. That means people can gamble 24 hours a day, seven days a week, and the more people who gamble, the more people there will be who do so problematically.”

Together with researchers at Kings College London, the National Problem Gambling Clinic, The Connection @ St Martins and other centres in Westminster, Sharman spoke to over 450 homeless people in London.

He assessed levels of problem gambling using a standard clinical diagnostic tool called the Problem Gambling Severity Index. He then compared the results with data from the British gambling Prevalence Survey.

*Now even though this study was conducted in the UK, people are people no matter where a person lives.
I also found another article that was done awhile ago, before the huge expansion of gambling opportunities now with Indian Casinos and State Lotteries. It to contributes and links addicted & problem gambling to homelessness*…
.
New statistics suggest link between gambling, homelessness… FACT: Comments on a study done in 1998 by the International Union of Gospel Missions (IUGM) which found that almost twenty percent of homeless people surveyed cite gambling as a cause of their situation. Number of shelters included in the IUGM study; Percentage of people who are still gambling even after becoming homeless; How the gambling industry has responded to the report; National implications as legislators debate the moral aspects of gambling…

Here is another article about our VETS and a link to homelessness due to Gambling Addiction in Psychology Today:

Vets Vulnerable to Gambling Addictions:
VA is doing little to address growing concern about vets’ problem gambling.
Published on May 8, 2013 by Eric Newhouse in Invisible Wounds …
. .
After risking their lives in combat, many vets don’t feel that rolling the dice for money is that big a gamble. But a number of authorities are concluding that combat vets are at higher risk to become problem gamblers, and the VA is doing little to address that problem.

“The prevalence rates of gambling problems and pathological gambling among veterans receiving VA health care exceeded those rates reported in the general population by two to four times,” their study concluded. “Compared to other populations, female and younger veterans were at particular high risk.”

And the study predicted that the problems may worsen because the proportion of problem gamblers to pathological gamblers was high.

“Many gamblers may still be in the early stages of their problematic gambling careers,” the study explained. “And the prevalence of pathological gambling may yet increase notably among veterans in the coming years.”

The study echoed conclusions set forth in a letter from the National Council on Problem Gambling to VA Secretary Eric Shinseki six months ago.

“Gambling addiction is a serious health problem that affects veterans and active-duty service members,” said the letter from NCPG Executive Director Keith S. Whyte. “It is highly co-occurring with other serious conditions and complicates the treatment of these disorders. In addition, gambling addiction has disastrous consequences for the veteran and his or her family.”

Whyte noted that 1 percent to 3 percent of the American public experience gambling problems in any given year, but “studies consistently find rates among age-matched veterans are significantly higher, and highest among minorities. Rates are even higher among veterans seeking treatment for some other disorder.”

The National Council on Problem Gambling recommended a two-part study of Veterans Health Administration patients to determine the severity of gambling problems and to assess the VHA’s readiness to address problem gambling issues among vets.

Whyte’s letter noted that the House Military Construction, Veterans Affairs and Related Agencies Appropriations Committee had already requested such a study and development of a treatment program for problem VHA gamblers.

“Problem gambling programs may provide cost savings for VHA through improved recovery rates, decreased demand in current substance abuse and mental health care programs, and a reduction in the social costs generated by untreated problem and pathological gamblers,” wrote Whyte. “Most importantly, it will ensure veterans and their families receive the best possible services and enjoy the highest quality of life possible.”

Despite repeated requests, the VA hasn’t said whether Shinseki had ever acted on the NCPG letter.
However, Whyte said neither he nor the congressional committee has received a response from the VA.

.
SO, I’ll close with this, Addicted Compulsive Gambling is GROWING. It has no bounds on who it chose’s do touch next. Our Vets are very vulnerable. Why?

Because when they come home traumatized from war, and then have all this free time on their hands when they get home, I’m sure many use addicted or problem gambling to “Escape” all the horrific things they have seen in war. PTSD is a mean BEAST! It’s why many like myself used gambling to cope, mask, or escape from childhood abuse and trauma. We don’t know any better to process all we have been through in a Healthy way.
We also may not have been raised to know that there places to go for help. The other set of people that gambling is preying on is our Seniors & College age young adults as well.

It’s time for something more to be done. Just like this article said, SUICIDE is very high among addicted compulsive gamblers. Even higher than drug addiction. So we need to talk and speak out about this expanding problem! ‘Shatter Stigma’ around this issue. It’s why I’m a recovering Advocate for Addicted & Problem Gambling. There are many resources available for gambling addiction. Please feel free to visit my Recovery Resource Page, as I have many of them listed for you.

And lastly, to the MAN from my social media site group who said; “PLUEASE, HAVE YOU NOT HEARD OF CRACK”, in response to a question Of, Does Gambling Addiction play a role in HOMELESSNESS?
HERE”S YOUR ANSWERS….. 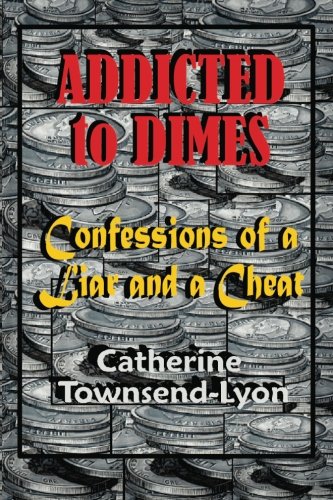 Addicted to Dimes (Confessions of a Liar and a Cheat)

Trackback URL for this blog entry.