Everyone Has To Have A Dream, Even In Recovery From Gambling . . .

Posted by kitcatlyon on Tuesday, 28 July 2015 in Gambling Addiction

I happened to see a new visitor come by my blog and he was reading an old blog post on my personal recovery blog.  It was way over a year ago and got me thinking of how far I have come as a writer, author, blogger and recovery advocate. So I thought I would re-share this post, as it deals with a question that I know everyone has thought about before. I would love to read your comments and thoughts about this, so don’t be shy! And NO, I haven't had a gambling relapse! LOL.  It is a 'Dream' I think everyone has had, and we all have to have some sort of a dream in life right?
Well this dream and question has been a dream for MANY. . . .


“OK, You’ve just won $1 billion dollars in your States Lottery. You do not have to pay tax on your winnings. What would YOU do and how would you spend the money?"

Now of course many of you know already I don’t Gamble . . . .
And I don’t want to be a “Debbie Downer” for all the rest of you fabulous people who enjoy spending a little for a chance at your piece of a fortune. Sadly, the odds of winning a lottery win-fall is so great that you would most likely have a better chance at getting hit by lighting, then you would winning a “State Lottery Draw Jackpot” . . .

Powerball officials say, “What are your chances of winning? A quick look at the Powerball website tells you the probability of winning the jackpot is 1 in 175,223,510. To see where that number comes from, imagine purchasing every number combination.”

I spent many years employed in the banking field, and oddly enough I had the good fortune to meet, two separate lottery winners in my home state, in Southern Oregon.  I have to say though, both stories are true, and a wee bit sad.  The first bank clients of mine that won Oregon’s “Megabuck” lottery were an older couple. They had bought their winning tickets at an Albertson grocery store, where they shopped at weekly.

The wife told me she has a set of numbers she used for each weeks draw, and it was the winning ticket that won with her numbers picked.  They came into to the bank and asked if I could help them invest the some of the money, and set them up with our investment specialist, so I made them an appointment with our financial planner.  A month or so went by, and I seen them in the bank again. She gave me the sad news that her husband was just diagnosed with MS.

They then came over and sat at my desk and explained the difficulties they have had ever since winning their money.  That their kids were all fighting because “they” didn’t share enough” of the winnings with all of them. She then told me how all their friends and family were making them feel like “THEY” have changed since winning, but that it was the other way around. She said all their friends started acting different and kind of became jealous, making them feel so uncomfortable.  So they put their house up for sale, and sadly they were moving to Carson City, NV.

They were having a house built there that will have special features so it would be a safe place once her husband became wheelchair bound from having MS. And, that was the last time I saw them. So it made me wonder about winning the lottery. Is it really worth it? We don’t understand that money can maybe make things financially easier for us, and that is about it. It won’t change WHO YOU are inside. Maybe in attitude or personality, but not the on the inside. Money alone can not make you happy.

Now the following year, a young man also had won our Oregon’s Lottery “Megabucks.” He had won $2.1 Million. He took his in a lump sum payout. I know this because he came to my desk with the check.  The check, after tax was $885,000.00.  He worked at a local hotel & restaurant, and he ran the food service for the convention center of the hotel. His name was Steve, and he was only 24 years old. Of course he did what any 24-year-old would do if winning a lottery, he paid his mom’s house off, bought himself a new car, truck, jet-ski, a boat and MORE!

I did open him a checking account, a money market account too. Just the interest alone from the money market was netting him in interest monthly, $2,800.00. That was more than he was making at his job, so he quit his job. What a mistake that was, because then came all the trips to Reno and Las Vegas. Then came all the relatives and friends came out of the wood works that he didn’t know until they heard he had “Money!”

So I did make him an appointment with our investment/financial planner and he attended the appointment, but never followed through with the financial plan. Of course sadly in a little less than a year his money was GONE!!  YUP! No Shit!  He came in and sat at my desk and told me his money woes. He had lent a lot of money to friends that said would pay him back, but of course they didn’t. He was smart to have them sign a written promissory note, but I’m sure he won’t ever see that money again. So again, what would you do if you won a large amount of money in a State Lottery? 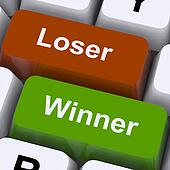 .
And I guess my point is most likely obvious. You have to be careful what you wish for in life. Even if it is having a large amount of money.  Remember, nothing is worth having if you haven’t worked. Nothing is really free.
And like the saying goes,  “Money Changes Everything” ~ “Mo Money Mo Problems”  .  .  .  .
Please, gamble and play responsively!
.